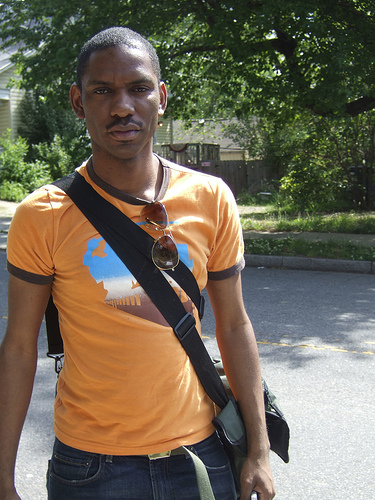 I have moved blogs! I will be closing Every Shut Eye Ain’t Sleep, though all the posts are here. This blog will be my permanent home, until www.kenyonfarrow.com is ready to go, which it will be a part of. It’s gonna take me a while because I am learning to design and build this site all on my own.

All of it. Everything.

It started in January. After 3 years my boyfriend and I parted ways last September. The break up was mutual and amicable, and we (in typical NYC fashion), continued to live together for several months afterwards. But breakups, though they can suck, force you take inventory. After getting used to being Kenyon and _____, it’s hard to then go back to being just Kenyon. I was forced to ask the question, “What do I want to do now?”

The answer was complicated. I had started grad school the same week of our break up, and was living on loans and whatever hustles I could piece together when not in school. So my ability to make decisions about the future, while predetermined for the time I was in this program, was somewhat limited. Whether or not I wanted to, or could feasibly pull it off, move out was what I needed to do.

And move out I did. I left in February, when my ex-partner was out of town. That wasn’t intentional, but just the way things happened. I had just begun my second (of three) semesters, and the thought of having to pack and move was more than I could stomach. I thank God for my friend who still lives in the same brownstone in the building I lived in many years ago who said, “Hey, I need a rommate. Move in.”

Having just started classes, no steady income, and greiving the end of my relationship, I was lost. Like an ember let loose from the remains of a burning mass–floating endlessly, with no weight to me, and as long as there is the slightest wind, landing is not an option.

When it came time to pack, part of me wanted to call my girfriends, and like a lost scene from Waiting to Exhale, drink wine and pack and cry and carry me away from my home. But part of me also wanted to just do the damn thing alone! And do it alone is exactly what I did.

I packed every box, sorted through all my things, and decided what I absolutely needed. I left some things that I came to the relationship with, but now, alone again, decided that I couldn’t bear to carry. Dishes. Pots. Pans. I wanted less weight. On moving day, I rented a van, and packed it myself. Boxes. Bags. Suitcases. Bookcases. I carried things I didn’t think it would be possible to carry by myself. This was the first weekend in February, and the temperature was in the single digits. It took me 3 hours to load.

When I got to my new (yet old) place, and I got to work. Unpacking, writing stories for school, trying to book some gigs. Doing my community work. And then I one day in March, I had a melt down. I stopped going to class for about a week, and considered leaving school in order to make money and get my bearings. I felt like I couldn’t breathe for weeks.

Evenutally I pulled out of the panic and the grief, and I am here, now.

I am still broke (yes, children, it’s an illusion!), but mostly happy, and still pushing myself to move forward, but on my terms. I am still figuring out what I want, and where I am going, but I do know that the most important lesson I’ve learned from the last several years of my life is that while I have the support of loving family and friends–people who really have my back–there ain’t nothin I can’t do my damn self.

I wanna thank all my people for being very present with me over the last few months. I know I haven’t told many of you I was goign through it like this, but you know I’m a Scorpio, and I tend to retreat until I pull it together. I want to really thank Joi (Thanks for Gravity, Dance with Yesterday, Co-Stars and Maybe.) for talking about what it’s like to break up with somebody, and know that you need to take your whole life and career into your own hands.

So with that, I am taking my life and career into my own hands. Rather than wait till I have the money to pay someone to design this website, or to have an agent to book my lecture gigs, or get me a new book contract, I am here, now.