I have recently been having a lot of conversations with Black women, particularly lesbian friends, about Black gay misogyny. Without going into grave detail (right now anyways), what are the ways in which black gay male performances of black women actually support patriarchy more than they do to disrupt gender norms? Why is it that many people in our community can only be bothered with women they consider femme, attractive, or some other superficial markers of womanhood while are incredibly hostile to women, lesbians in particular who don’t perform for them, or fit certain high-femme gender norms of what it means to be a woman?

In any case, while I sometimes really am annoyed by Black gay misogyny, I cannot help but also be entertained and highly value the ways in which we continue to develop a whole language and culture that is a whole thing all its own. Case in point, the following video (and if you go to Youtube there’s a whole series of these) of a fake conversation between Janet Jackson and Mariah Carey, which the two describe their frustrations with the other so-called Divas and Legends, reading as if they are two queens from the Ball scene. And what’s funnier is the script run through a computer voice interpreter which strips away the contours of how we actually sound, but you get to hear the actual words and phrasing. This is clearly written by a Black gay man, and while I have to ponder at the ways in which we invoke the feminine that are sometimes horribly problematic, it is at the same time very creative, inspired, and in this case, damn funny.

The last few days have been strange.Perhaps it was not so strange, as it was a series of events that got me thinking alot about Black gay life in New York.

Last week, we lost Octavia St. Laurent, singer and Ball scene legend and icon, who most would remember from the documentary Paris is Burning, and she also appeared in the 2003 film How Do I Look? Octavia was a really outspoken advocate for transgender and “third gender” people. In How Do I look? she describes herself as being third gender, and how she remembers seeing more third-gender people in the Black community years ago, but how violence and HIV/AIDS had taken many away from us. This is a really great interview of Octavia. Rest in Peace, Sweetie.

On Saturday I got an email from my ex forwarded to him about the  NYPD beating and arresting two Black lesbians outside of a nightclub in Bed-Stuy–right down the street from me. Audre Lorde Project’s SOS Campaign is taking the lead on organizing a response–which includes a rally on June 6th. Here’s the email in its entirety:

I am writing today with a heavy heart. And for me no matter how much the world seems to dissappoint me I always want to bounce back. But this time is a little different.

I and another lesbian in the community were involved in a BRUTAL BEATING by ALL MALE COPS the 77th PRECINCT of the NYPD.

NOT ONLY WERE WE BEATEN, COPS HURLED ANTI-GAY STATEMENTS AS THEY RAISED THIER NIGHT STICKS IN THE AIR. LIKE “YOU FUCKIN BITCH ASS DYKE”… AND THEN HAD THE AUDACITY IN FRONT OF THEIR OWN SEARGENT AND THE REST OF THERE BROTHERS AND SISTERS SAY “WE ARE HAVIN SOME DYKE PUSSY IN HERE TONIGHT”

Really ladies… This crime wasn’t about me or about the other female involved. As I laid there and I felt the night sticks hit me, I thought of Martin Luther King, and what he had to endure just for us to have the freedoms we do today. I immediately relaxed my body, put my arms up where they can see I wasn’t resisting, and screamed at the top of my lungs for someone to hit record on there camera. As they pulled me into the car I knew then that they picked the wrong quote unquote “DYKE”, to mess with.

TODAY!!! ITS TIME FOR US TO MAKE A DIFFERENCE!!! I don’t know about you, but I am absolutely tired of the way police, club owners & bouncers treat us. If you didn’t know what they think about YOU. I hope you RECOGNIZE NOW, what it really is.

THIS IS WHAT WE NEED:

DON’T LET ANYONE TELL YOU IT ISN’T YOUR BUSINESS, IT IS. IF YOU HANG WITH US, PRAY WITH US, IF YOU PARTY WITH US, IF YOU SHOW YOUR PRIDE WITH US, THIS CRIME WAS COMMITTED AGAINST YOU AND MEMBERS OF YOUR FAMILY. Email me @ civilrights@LadiesLoveLadies.com

As many of you know, the California Supreme Court upheld Prop 8, which placed a state Constitutional ban on same-sex marriage but declared the 18000 same-sex marriages that occurred between May 15 and November 5 to be legal marriages. A mess. Anyhoo, I was passing the NYC protest and March that happened last night protesting the decision and got some photos. Some of the posters are, well, I’ll let you decide. 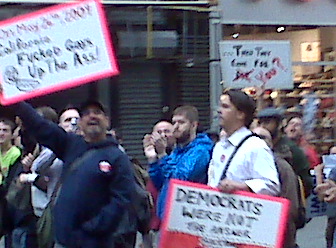 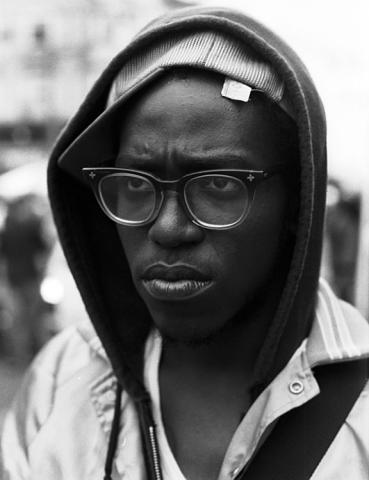 I met Brontez Purnell about a year ago in Oakland. Anyhoo, we’ve become very good buds and and I continue to learn how totally talented he is–not to mention hella sexy. Here’s his bio from Zinewiki:

Brontez Purnell is a zinester, writer, dancer and musician, who now lives in California.

Brontez was originally from Triana, Alabama, then moving to Huntsville, Alabama, and then to Chattanooga, Tennessee, where he released Schlepp Fanzine while still living at home. He then relocated on his own to Oakland, California, where he released his next zine, Fag School. Three issues of the zine have been released to date. During this time he was in a number of punk bands.

After his arrival in California, he briefly played guitar for the band Panty Raid, then joined the group Gravy Train!!!!, (as ‘Junx’) in which he continues to perform, record and make videos with. He is also the mastermind behind the band The Younger Lovers. He has performed with the band Hot Ass Sex Bomb with members Janelle Hessig and Vice Cooler and, as well, he DJs at clubs in San Francisco.

Brontez has written for various publications, including the on-line edition of Jigsaw, and has also written a column called “She’s Over It” for Maximum Rock ‘N’ Roll. He has read his work at Lit Quake in San Francisco.

Here’s a video of him reading from Fag School. It’s hilarious. Brontez was in NYC a few weeks ago doing some shows, and I wish he lived closer. I miss him and we’ve only seen each other like 4 times.

Instead of spending your hard-earned cash on the boys on the pole, in the back of HX, or on the now ill-fated Craigslist escort “Adult Services” ads, go see some Whore Works, playing at the Kraine Theater for 6 more shows.

WHORE WORKS features a male prostitute (played by Juan Michael Porter II, who also wrote the play) servicing several clients, (all played by Bryan Webster, far left) over the course of several vignettes that are by turns pulse-quickening, thought-provoking, hilarious and surreal. If you’re a prude, from the Family Research Council, or don’t like male nudity and simulated sex acts, as George Clinton once said — KEEP YO DEAD ASS HOME!

The play explores the dynamics of sex for pay, and what happens when feelings get caught in the trade–but this is no Pretty Woman. Bryan Webster’s work is some of the stongest and most engaging character work I’ve seen in a long time on stage for an actor playing multiple roles. Sex aside, Webster’s work is worth the price of admission.

Tickets $18 available by calling TheaterMania at 866-811-4111or online at www.whoreworks.com

As much as I don’t think hate crimes legislation will do anything to curb or combat homophobic violence, I am at least happy to see Rep. Barbara Lee talk about Black and Latino LGBT folks–which quite frankly very few politicians of color are willing to do.

She, against the wishes of the Bush Administration, also attended the 2008 International AIDS Conference in Mexico City, and was very vocal about the epidemic in the US, and the need to focus prevention efforts on Black gay men.